A little Paris, A Little Lyon 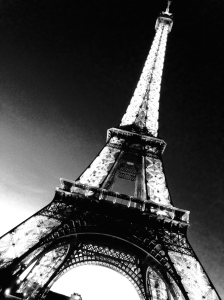 I have a whole bunch of cities and countries on my list of ‘Things to See and Do’, but for some reason, Paris has never really been at the top of this list.

Recently though, I was fortunate enough to spend a week exploring this amazing city with a group of 9 other agents, and I can happily say I have been won over – it really was spectacular!

Paris lived up to all its expectations … and even more actually. It’s everything everyone has ever told me, and it’s easy to see why people keep going back for more. From the history and culture, to the stunning architecture and landscapes, it really is quite breathtaking.

Whether you’re a seasoned traveller, or enjoying your first big trip overseas, there’s a way to explore Paris at a pace that suits you. You can spend hours walking aimlessly through little cobble-stone streets, zig-zagging your way across the city, or hopping from one charismatic cafe to the next. You’ll find a place to eat and drink on every corner, where you can sit back after a long day of sightseeing and watch the world go by (literally – the seats all face out onto the streets), and trust me, you’ll probably need it after a long day of exploring. Try the snails too, they look a little strange, but if you close your eyes and forget you’re eating snails, you might actually enjoy them. Just an FYI though – they do not taste like chicken.

A walking tour, like the Experience Bohemian Paris which we did, can take you through tiny alleyways into quiet secret courtyards, and teach you all about the interesting history behind the beautiful architecture that Paris is famous for; while hiring bikes and exploring at your own leisure, is a little more exhilarating, and made super easy with conveniently located city bikes for hire, at a very decent price – but be careful, their road rules are a little different, and a lot crazier than ours.

Although it’s very ‘touristy’, no trip to Paris would be complete without a visit to Notre Dame, The Louvre, Arc De Triumph, the ‘love lock bridge’, and the Eiffel Tower. Most city tours will take you there, or you can jump on the Le Open Hop-on Hop-off bus tour, to tick them all off your list. Despite there being hundreds, maybe even thousands, of fellow tourists around taking the same photos as you are, at exactly the same time, you do not want to miss out on seeing them in person. There really is something magical about these great landmarks, and it doesn’t matter how many times you come around the corner and see them again, you’ll be in awe each and every time. Then come night-time, when all the perfectly positioned lights are switched on, you’ll want to see it all again!

As for the people who told me that the French are rude and dislike tourists, well, they must’ve caught someone on a really bad day, because this is totally false. I can count on one hand the slightly unpleasant experiences I had while I was there, and it was nowhere near enough to ruin your day (which is more than I can say for my local shopping centre here at home). Just learn a couple of simple words before you go, and don’t be shy to try them out on a local! A little tip – Bonjour is used in the first half of the day, but after lunch and in the evenings use Bonsoir.

Once you’ve fallen in love with Paris (it’s not called the city of love for no reason), you’ll want that same feeling over and over again, and why deny yourself? Just a short distance away is another picturesque city called Lyon, which is bound to give you the same warm and fuzzy feeling that makes you never want to leave. We caught the train and I thought it was a much faster and smoother process than having to go out to the airport again. It was a short, but very comfortable 2 hour journey, and a great opportunity to give our feet a solid rest.

The trains are very clean and comfortable. The only downside is you have to take your suitcase on with you. There are luggage storage racks at the entrance to each carriage for large suitcases, and overhead racks in the carriages for smaller ones. One thing to note if you travel with a lot of luggage or have heavy bags is that there are no porters, so you’ll need to lift your luggage into the train and onto the racks yourself.

Arriving in Lyon, we had no idea what to expect. I feel silly to admit that most of us thought that we’d be spending the next 2 nights in a little country town, but boy were we wrong. Picture Paris, but with less tourists, less souvenir shops, a little less cars, and a little more authenticity, and you have yourself Lyon. It’s the third biggest city in France, and yet they manage to maintain that warm, exclusive kind of feeling. They even have a Basilica that looks almost exactly the same as the Notre Dame – only this one is perched on a hilltop, overlooking the entire city!

Although you may not spend quite as much time visiting the tourist sites in Lyon as you would in Paris, you can easily spend just as many days exploring the narrow streets, tiny courtyards and great shopping that fills the city. Once again, a simple half-day walking tour will show you some secret spots, and give you a great insight into how the city really works. Plus, Lyon is famous for it’s amazing food and wine, so once you’ve visited the sites, you’ve got plenty of cafe and restaurant options right at your fingertips … whether you’re after a fresh croissant or delicious degustation menu, Lyon has it all. Be sure to try their local delicacies too, they may not sound very tasty to you at first, but be sure to let your palate decide that for you!

Despite initially having some doubts about whether or not it’d live up to it’s expectations, I fell in love with The City of Love, and it’s little sister Lyon, and I’m sure that everyone who steps foot on one of their cobble-stone streets will find something they love about these two spectacular cities too.