The Basics of Siem Reap

Leigh Hayden has just had an amazing experience travelling with a group of first timers to Cambodia’s awe-inspiring Siem Reap. If you like Buddhist temples and Pina-Colada’s (USD$4 for cocktails) …. then this is the place for you …

“We started off our journey on Vietnam Airlines, who were punctual had a great choice of food on the menu. The airline had the smoothest takeoffs and landings I’ve ever experienced. The staff didn’t know much English so some people were boarding the plane with the wrong boarding passes, but hey, what’s life without adventure.

When heading to Cambodia, make sure you take a passport photo and US dollars with you to abtain your  visa on arrival. It can take 45 minutes to process all the paperwork and collect your bag if you’re prepared & have your own pen. There is an entry card, a queue for an Ebola health card, a queue for a visa application form, a queue to collect the visa, and then the queue to go through customs, but by then your bags are out and ready for you. No waiting there at all.

Buffalo Tours met  us and right from the start it was service with a smile which only improved from there. There was no missing the Buffalo Tours / Infinity Holidays sign. They were very keen to help us with our  bags and very approachable if we have any questions. They had even completed the hotel check-in process for us and had room keys ready when we walked in to the lobby (at the end of our trip we were told that Buffalo staff are paid bonuses for good reviews on trip advisor so if you use them and are happy please review Buffalo Tours.)

Our first stop was at the Angkor Paradise Hotel which is where we stayed for the entire time. It is exactly what I would expect from a 4* hotel in Asia; clean with a well maintained pool, medium sized breakfast buffet, and WiFi available 90% of the time. Some stand out points were that the rooms are large and the pool is extremely large.

We woke at 4:45am  and made our way to see the sun rise over Angkor Wat. This is more than just seeing a hot yellow ball rise in the air though, it’s a postcard moment. There are over 1,000 people there on a daily basis so you’ll need to walk past the child hawkers and push through the crowd to get your money shot.

After the sunrise you can tour the whole complex, including climbing up to the top of the centre tower where the kings tomb originally was. There are other surprise aspects to the complex as well, like curious wild monkey families. 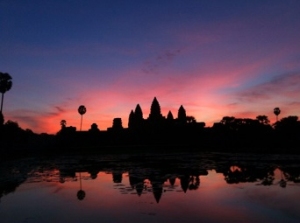 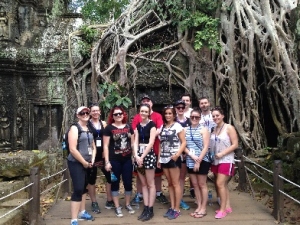 None of us had ever been to Cambodia before, and after seeing Angkor Wat, we hopped on bikes and started to explore the rest of the Angkor temples region. The thought of a bike ride was daunting for some in the group. Asia is famous for its heat & humidity after all. But the breeze while we were on the bike was refreshing and the entire ride was dead flat which made it easy.

Angkor Tom was next. It’s a 3km by 3km fenced temple city and was detailed, ancient and impressive. Then we came across the Jungle Temple which was built by the king for his mother, and THIS is the Tomb Raider temple. Right now it looks like a game of Jenga that ended in a temper tantrum, but Unesco are in the process of restoring it to it’s former glory.

Siem Reap Cooking Class:  I’ll be honest, the only cooking class I have ever done was in Canberra and was run by the Chef from Raffles SIN, so I wasn’t ready for this. The tour started with a walk through the local markets to see where our produce has come from, which was only a short walk but it’s not for the faint hearted…. at all !!! Then we arrived at the kitchen and we were back in first world comfort again. The kitchen was clean, the chef spoke enough English and the food was delicious. We made fresh spring rolls, Amok (a native leaf) fish, and fried bananas with honey & passionfruit.

Waaaaay out in the middle of nowhere (no exaggeration) is the village that Buffalo Tours have adopted as their charity; The Chansor Community Village, where Buffalo have paid to build a library for the local school, and a donation is made for every tourist they bring in. The tour itself is a real eye opener. It begins with meeting the heads of the village, and then an ox cart ride to the rice fields. (right about now you’re really glad you have sunscreen in your bag) Once you get to the rice fields you’re escorted out in to the middle of the rice paddies to see some locals at work in the fields. (right about now you’re glad you wore sensible shoes that you don’t mind getting dirty).

Another ride on the ox cart now (yes, more sunscreen) to the school where we met the principal who told us all about the challenges he faces trying to find teachers that are willing to work, and then willing to stay at it on a teachers wage. The class system is rampant in Cambodia and teachers are low class because of their minimal wage.

More time in the ox cart again (where’s my sunscreen?) to some of the local houses / huts to see brooms being made. The brooms are made of a special grass that can take 2 months to dry properly. They are then woven by hand and sold for USD$0.50 each to help support the village. Some other points we picked up here that were not scheduled as part of the tour is the absence of running water and dental care. These people are really doing it hard. Lunch was cooked by the village, and it was delicious.  After lunch we were blessed by a monk and made our way back to the hotel.

Some of the hotels we inspected on our trip were:

The Victoria Hotel; Half of our group voted this as the nicest property we saw. It was perfectly maintained tropical hideaway with balconies on every room and lush gardens. The Victoria also has a policy of paying for English lessons for any staff that want them. The breakfast buffet was enormous, they have a kids club and the pond by the lobby has crocodiles.

Park Hyatt Hotel;  The other half of our group voted this as the nicest property we saw. Only 12 months old, spotlessly clean, with a focus on being modern and quiet. It’s very designer with a place for everything and everything in its place. They have plunge pool villas but everyone on the second floor can look down directly into your pool so pack your bathers.

Sokah Angkor; The Sokah was the hotel that considers itself to be the nicest property we saw, and if the spa was anything to go by they’re right. The French influence is everywhere in this hotel right down to the 1920’s Citroen cars available for hire as taxis. It has been perfectly maintained and even has it’s own nightclub called Titanic that’s open unitl the last person leaves. 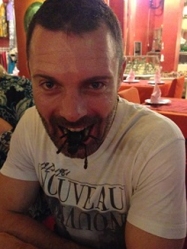 Shinta Mani Club & Shinta Mani Resort;  Another one with a wing on each side of the road, this is an example of “just clean and comfortable”. Very basic rooms and resort, but has a recently refurbished pool. There is only one restaurant so people in one wing have to cross the road for breakfast or a swim, and it’s a very big road, so request the wing that has the lobby.

Dining out in Siem Reap is cheap as it’s cocktails with main courses under USD$10. The street food was also pretty safe. There were safe options like Nutella pancakes in carts, as well as the more exotic grass snake on a skewer. The snake looked pretty filling, but I ate a Tarantula.

If you’ve read this far you may have also noticed I didn’t go into detail about the hotel locations. That’s because it doesn’t matter. Siem Reap is a tiny city (the whole country is only 500km x 350km) and a TukTuk is USD$1 per person to go from anywhere to anywhere. “Pub street” and the night markets intersect in the middle of town and this is where most of the tourist dollars seem to be going. When you’re at the markets, apply the usual Asian bargaining techniques and haggle them down.

I think that’s it from me now – thanks!”